Grateful thanks to the Haverthwaite & Lakeside Railway for hosting Alec’s visit to their signal boxes.

After 50 years continuous service Alec Crouch retired from the Priory Choir on Sunday 22nd July 2018. Chairman Nick Walker spoke to the choir and congregation following morning service and outlined Alec’s career in the choir, professionally and of his personal interests. In line with his interests he was presented with an array of gifts by the current director and various Association Committee members. These included the RSCM Long Service Medal and certificate, vouchers from the Lakeside and Haverthwaite Railway and Lancashire County Cricket Club, a framed picture of the City Of Lancaster steam engine at the Castle Station with the Priory in the background and a framed picture of himself stood in

the choir stalls. Nick said of Alec that he had been loyal and faithful to the choir, a support and friend to his colleagues, an example of service

to everyone and that the choir had been proud to serve with him. Also remembered was the contribution made by Alec’s wife Jan in organising family life around choir activities particularly when the family was growing up. Jan was presented with a bouquet in the choir colours and a guest ticket to the cricket something of which she is very fond. Nick closed by thanking them both. Alec responded with some well chosen words declaring that he had been humbled by the generosity of his gifts, his thanks for the hours spent singing in church choirs

and for the fellowship of his colleagues. Alec received a standing ovation which was well deserved!

Following the presentation Alec and Jan were the guests of the Association who hosted a Sunday Lunch at the Butcher and Tonic in the city.

Below is a picture of the choir taken we think at Christmas 1963. If you’re on it please get in touch via our e-mail or web address 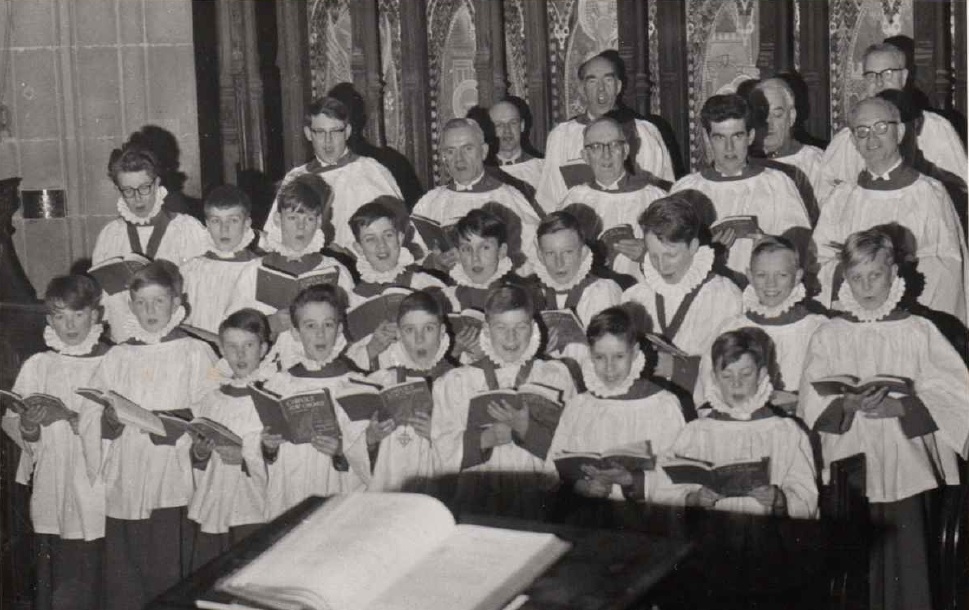 Jeremy Truslove: a tribute from the choir

Jeremy Truslove retires from his post as Director of Music on 16th October, after two spells, spanning 30 years.

Over this period he h

as developed the choirs (men, boys and girls) to the excellent ensemble they are today. To do this he has encouraged, inspired and cajoled to achieve his very high standards. He has given the very young choir members their first experience of choral singing, often patiently giving them time to adjust and to tune in to what must be a rather daunting experience. With the older members of the choir he has made sure that we never slip into complacency, and that we must always be aware that however well one performance might have gone there is no guarantee of future success without continued hard work.

The work of a church choir director is very different from that of the conductor of a choral society. The latter works on pieces over a period leading up to the culmination in a concert. The church director however, is conducting a regular series of events, week after week, sometimes repeating regular repertoire, sometimes introducing new pieces. Jeremy has carefully blended the familiar with the new, making sure that the choirs always have pieces to challenge them, while keeping the regular repertoire fresh.

And what a repertoire he has grown over the years. It ranges from the great pieces of 16th and 17th century counterpoint (Tallis: O salutaris hostia, the Byrd masses), through monumental nineteenth century anthems (Wesley: Ascribe unto the Lord), to modern masterpieces (Dove’s Missa brevis). Communion settings include works by Haydn, Mozart and Howells, together with Jeremy’s own excellent Lancaster Mass. New evensong settings have included those by Howells for King’s College, Cambridge, and for Gloucester and St Paul’s Cathedrals. In addition to singing in the regular English and Latin, he has introduced texts in French, German and even Hebrew, not to mention a short passage in Malagasy!

All choir members, young and old, are immensely indebted to Jeremy for taking us on these many musical journeys. He will be greatly missed.

Celebration Presentation to mark the retirement of Mr Jeremy Truslove

To mark Mr Truslove’s retirement we felt that we should host a celebration presentation and farewell for the choir family separately from the Parish presentation made following Evensong on the 16th October, Mr T’s last Sunday. The choir presentation was made after morning service. It was preceded by a choir photo on the chancel steps with Mr.T in his rightful place in the middle! We then adjourned to Dolphinholme Village Hall for a Jacob’s Join and made our presentation to Jeremy.

Retirement of Mr Rodney Webb after 65 years of service

The 25th September saw the last service at which Rodney Webb sang in the choir after more than 65 years of service, a remarkable record. Rodney joined as a boy eventually rising to be Head Boy and then going on to sing on the alto line until now. He was a most talented person playing both football and cricket for the town, a regular performer in amateur dramatics and sang with his friends in the barber’s shop quartet which often entertained at Priory functions. Rodney’s skills as a joiner were often put to good use around the church as well but it was his commitment to the choir for which we are the most grateful.  A presentation organised by the Choir Association was made to Rodney on behalf of the whole choir after morning service on his last day, attended by friends and family along with members of the congregation. 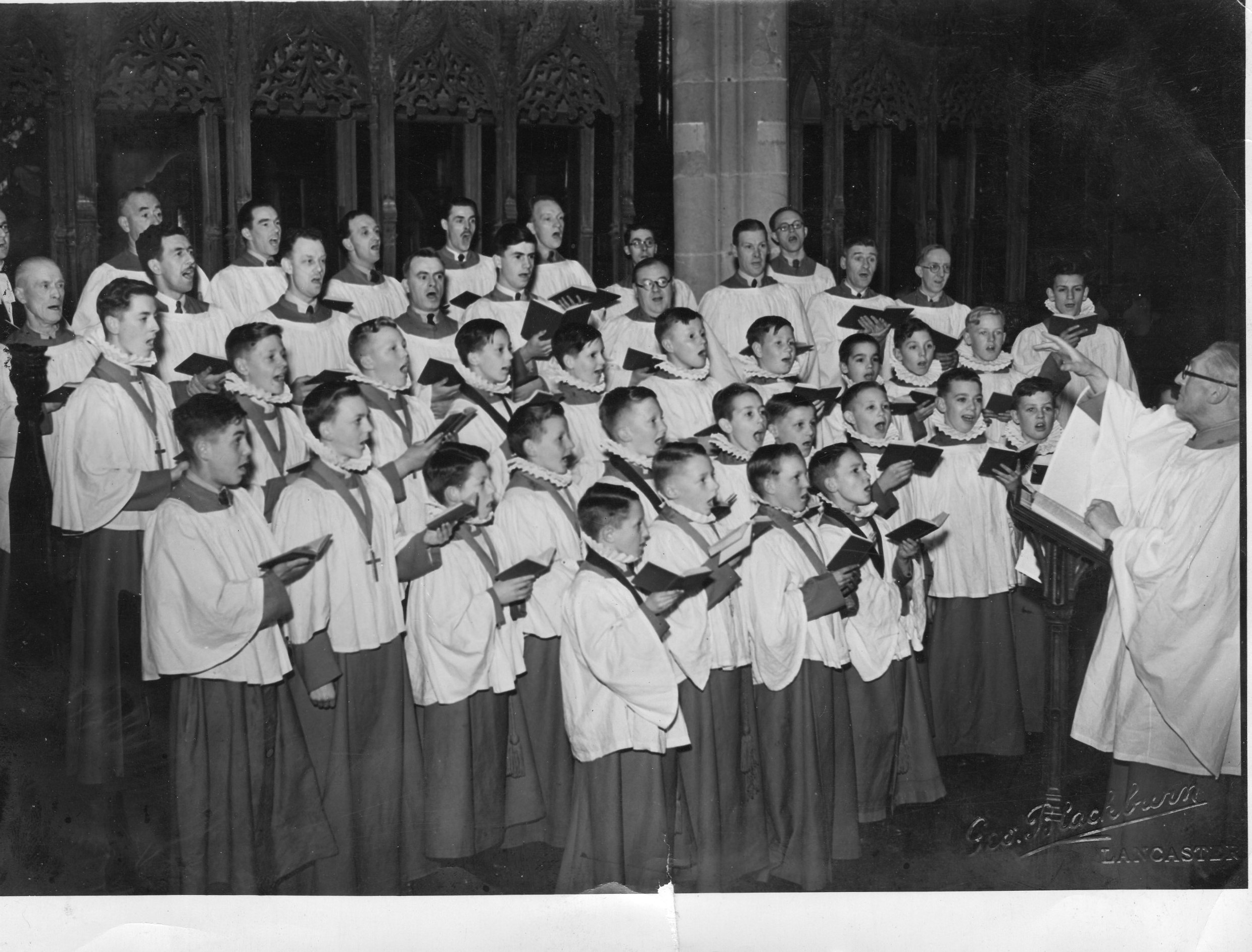 Colin writes,” Throughout the war years the choir was a very close knit group and friendships have lasted to this day. We sang Choral Evensong a number of times through the war live on the BBC Forces Broadcasting Service and it is possible that the photograph was taken at the rehearsal before our last broadcast in the series.”

Thanks to Colin for this. If you recognise yourself on the photograph please get in touch with us.